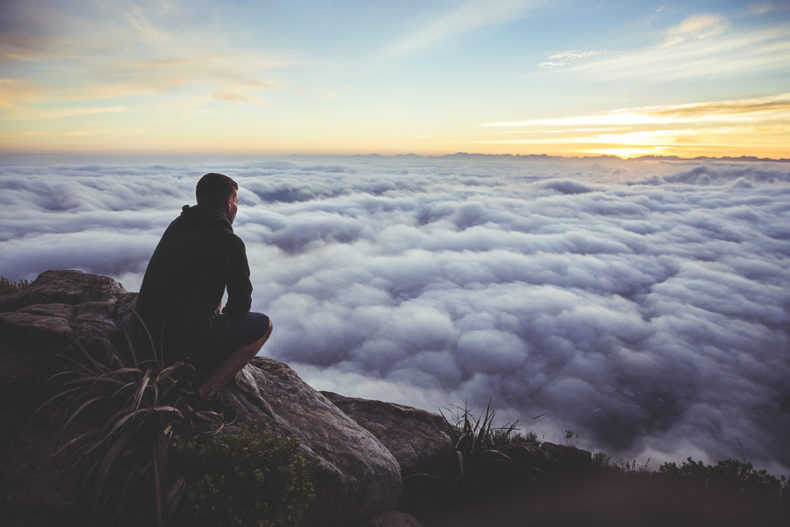 How To Train Your Mind | We reach adulthood understanding creativity as a capricious lightning bolt, some willful force of nature that haphazardly strikes only who and when it sees fit with no comforting method to its madness. People either accept that chaotic notion or perceive ideas as manifestations of some cerebral voodoo, a rapport with some inscrutable ether that an individual is either blessed with or bereft of, a real-world analog to the Force.

As it turns out, reasonable minds could differ as to which concept lands farther from the truth. I would more closely compare any idea to interest paid on continuous principal investments of time and structured contemplation. If you find yourself scraping your blown mind off the wall, I promise to scoot over and give you some room. The truth is, anyone can refine a productive creative process no different from any other pattern in which we learn how to learn. That’s because an idea is not an inexplicable electrical impulse to which some individuals are more prone than others.

The saying “Necessity is the mother of invention” resonates because ingenuity is a motivated natural response.

The Three Stages Of Inspiration

The “Eureka!” moment when I encounter an idea in full bloom strikes me like a bolt from the blue, an instantaneous rush of inspiration that compels me to unstoppable motivated action. I know better, though. That invigorating juncture actually culminates a third and final stage of inception built on two prior processes that resolved quietly in the background while I was none the wiser:

Science has long since debunked the notion that creativity strictly emanates from just one hemisphere of the brain. Without some curious elective surgery, the left and right halves connected by a band of neural fibers called the corpus callosum maintain the human body’s every function through constant collaboration between their respectively unique processing styles. Rather, if we boil creativity down to its physiological engines, we can trace the birth of an idea through three networks and centers within the brain instead of generally attributing it entirely to a single hemisphere.

The Attentional Control Network, which keeps us focused on a single task or problem at a time.

The Imagination Network, which generates mental images while recalling past events and playing out hypothetical future scenarios.

The Attentional Flexibility Network, the mechanism overseeing everything that transpires both around us and inside the brain while alternating between the Attentional Control and Imagination Networks as needed.

Clinical research on improvisation musicians has suggested that creative engagement reduces the Attentional Control Network as a means of allowing our recollections of experiences to permeate our single-minded focus and generate entirely combinations of data based on the relationships we observe. “Suddenly,” we have ideas.

“Suddenly” belongs in quotations because every billion-dollar idea began as a memory of a mindfully processed experience before our awareness of immediate circumstances called upon it and catalyzed a relationship between what we know and the task at hand. Before we can be effectively creative seemingly at will, we need to fill our coffers with as much data from the world around us as we possibly can and take as little of it for granted as possible.

If you’ve seen “Iron Man,” the 2008 global blockbuster that set the unprecedented success of the Marvel Cinematic Universe in motion, you no doubt remember Robert Downey Jr.’s guilt-ridden billionaire-genius weapon designer Tony Stark building his original armored suit in a cave with repurposed spare parts. That one montage exemplifies the true essence of creativity.

After a roadside ambush, Stark has an improvised electromagnet powered by a car battery keeping lethal shrapnel from piercing his heart. After being kidnapped and saved by emergency surgery, he looks around him at a cache of weapons he himself designed. Instantly, his personal inventory concludes that he has the components to build a miniaturized arc reactor, the revolutionary power source running his Stark Industries factory back in the United States.

As he mentally uploads this stored knowledge of the schematics for both his weapons and the full-sized powerhouse, he concocts a mental Ven diagram that adapts them to the problem demanding his immediate undivided attention – build the terrorists who kidnapped him a Jericho missile or give up on ever leaving Afghanistan alive – for a two-birds-with-one-invention solution: build a chest piece that powers both the magnet and, eventually, a makeshift mechanized suit of flight-worthy combat armor to make good his escape.

How To Train Your Mind

Consider for just a moment that Downey strongly based his interpretation of Stark on two real-life geniuses who shaped their respective lifetimes with their ingenuity: Howard Hughes and Elon Musk. The only thing holding back you or I or anybody else from the next idea that tilts the world on its axis is the breadth and depth of our experiences.

The brain stores memories of our experiences safely in the recesses of the hippocampus, its long-term memory database. The legendary Sherlock Holmes calls it his “brain attic,” that warehouse fueling him through evaluating seemingly hundreds of possible solutions to any mystery in a single moment while Dr. Watson adheres himself to the first obvious conclusion. That rush of insight comes from your cognitive processes creating a match between an experience’s associated information and the topic pressing upon you. The greater our libraries of memories, the more individual packets of data we can link into inventive chains of new combinations.

Our world tends to uphold formal education as its most prized commodity among experiences. While I would never discount the value of spreading one’s repertoire of knowledge through higher learning, I also believe there’s a very simple explanation for college dropouts such as Richard Branson, Steve Jobs, Bill Gates, and Frank Lloyd Wright achieving such remarkable feats in the real world: they ravenously consumed experiences. Matriculation is never more valuable than when paired with a thirst to live, try new things, occasionally flat on one’s face, and internalize the meaning in every step of the way.

A college education itself has rarely held anyone back from greatness. Rather, I accuse a certain complacent over-reliance on academia of luring students into a misguided sense of security. Anyone can store and regurgitate lessons from a book or lecture. Test-taking is a learnable skill. You don’t really “know” anything until you put it into practice or see it in action.

For all the time you might spend in a classroom or buried in books – both priceless experiences themselves – you haven’t begun to learn until you have begun to live. Change up the route you to take to work. Walk or ride a bike instead of driving. Try new foods. Travel. Learn a language. Every moment you tune into the world around you, the hippocampus swells with resources to one day call upon. The more extensive your experiences, the more versatile and creative you allow yourself to become.

Again, think about creativity as payment on an investment. Assume you have paid your principal in experiences. The processing stage accrues interest.

Creative inspiration can find its grip anywhere at any time. It truly flourishes when given time and space to weave its relationships between old elements of memory and necessity of a novel solution. Most importantly, the process plays out best in the background, when being clever is actually the furthest thought from our minds.

Make no mistake, there is a crucial active element in the process. Seeds of experience blossom under the weight of personal contemplation, further enriching research, and reflection paired with diverse feedback. I cannot stress enough just how integral opinions from outside an area of expertise can be when seeking a fresh perspective on a problem. Anyone can slowly blind themselves to the forest by staring outward from a single tree in only one or two directions.

Be Creative And Gain A Competitive Edge

Abandoning the echo chamber adds depth and contrast. It can introduce us to flaws, benefits, and other components of ideas and experiences that might remain stuck in our blind spots without an examination beyond our own seat. Imagine looking out a window at another person looking inward. Your counterpart can see things happening right over your shoulder or 90 degrees in either direction to your right or left that you might not be aware of at all, especially if you stand too close to the surface to take in your reflection.

Trust me, there are a lot of slasher-movie victims who would have appreciated just such a second set of eyes on a problem.

Next, comes the tricky part: you have to go about your business without trying to be creative. The brain processes our stores of experiences relevant to our immediate surroundings in unimaginably rapid fashion, but it works best passively. Reflection weeds out what makes a recollection pertinent to your present focus, but we process relationships and combinations of experiences best when distracted. For the very best results, concoct a creative haven, some environment of ideal time and space where the Attention Control Network can downshift and both hemispheres’ uniquely designed processes can more easily mine the hippocampus.

Return to that place frequently enough, and your brain will begin to recognize yet another valuable relationship: the one between that specific environment and explosions of ingenuity.

This is it. This is where you break the eggs.

Do you know the most important thing Sherlock Holmes and Tony Stark have in common? In their own personal ways, each never stops tinkering. Holmes will furiously consider one possible solution after another, ruling out some and setting others aside as plausible enough to pursue. Meanwhile, Stark always has a new suit in the works, whether a gigantic armor set reinforced to go toe-to-toe with the Hulk or a full suit that travels and equips from a briefcase. Even when developing his Mark II design, how many times did overpowered flight stabilizers send him careening into walls?

Not every investment will be a blue-chip stock. Nevertheless, embrace the bad ideas. Critique them as they come, but don’t let that stop you from building them. Your mind churns at a brisk enough pace to cultivate 100 ideas in less time than it takes to watch a sitcom and do it without breaking a sweat. Humorous notions, in particular, can catch anyone off-guard with a moment of asking, “Wait, why am I laughing? That’s actually clever.”

As you observe everything in your environment, be mindful of how you feel and what occurs to you. Write it down in an ever-present notebook or set aside a folder on a device’s home screen to file away photos and notes when something sparks. When an idea shoots from the soil, cast a huge feedback net while personally evaluating experiences yourself.

Most importantly, live. Don’t just breathe. Build your own adventures. Nobody has ever grown flush with interest without investing something.