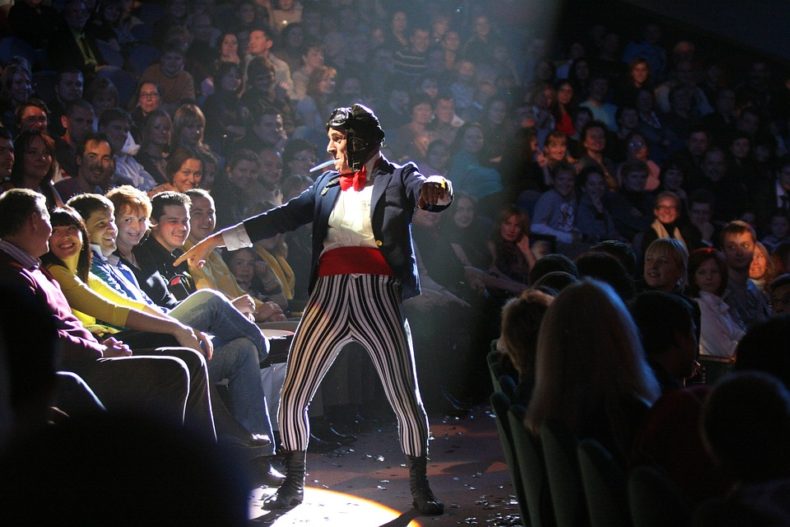 Standup Comedy: Legendary professional wrestling personality Jim Cornette is always ready to espouse a succinct, long-held personal conviction about infusing in-ring drama with excessive levity. ‘Funny doesn’t make money, the Louisville Lip decisively tells his podcast listeners and obsessively devoted fans. Angling for the occasional chuckle is one thing. Turning a method-acted craft into a Vaudeville sideshow is nothing short of mockery. Something he and many others among his generation of dedicated carny players take pretty damn personally. For the record, let that stand as one more reason so many men and women eschew breaking their bodies inside the squared circle in favor of other theatrical performance avenues.

Who in their right mind could withstand devotion to a storytelling format wherein humor is seen by some as antithetical to good business and engaging communication?

Truth be told, few performing arts test commitment to preparation, perpetual creativity, improvisational thinking at the speed of light, and an almost masochistic embrace of failure with quite the unforgiving rigor of stand-up comedy. For that matter, lauded comics including Marc Maron, Sarah Silverman, Patton Oswalt, Chris Hardwick, and Margaret Cho are regarded beyond the stage as some of popular culture’s most compellingly intimate, candid storytellers. Take just a moment and gnaw on the fact that their generation of comedians drew undeniable influence from such fascinatingly intelligent recipients of the gift of gab as Bill Cosby, George Carlin, and Robin Williams.

We get it, and so does your audience. The thought of pontificating for 30 to 60 minutes throughout the length and breadth of your chosen topic’s minutiae gets you out of bed every morning. Bully for you. Unfortunately, nothing guarantees your audience sharing your laser-like, obsessively focused fixation to such a degree that they regard every talking point with perpetually furrowed brows and hearts filled with maudlin pathos and gravitas. Please, for the sake of everyone who has to listen to you, lighten up.

The first step to keeping your audience chuckling and smiling throughout as much of your talk as you prefer is to rarely come across like you are actively trying at all to make them laugh. Please, never be that guy. Your aim should be to humanize yourself and lighten the taste of your heavier subject matter by coming across as relatable as possible. Shoot for less Rodney Dangerfield or Henny Youngman and a bit more of the most charming guest you’ve ever rubbed elbows with at a relaxed after-hours cocktail meetup. Your real-life anecdotes should hit home as charmingly familiar yarns that could have taken place in most of your audience’s everyday lives. This part isn’t rocket science. Simply write what you know.

Ensure The Jokes Are Relevant To The Story

Unless you happen to be addressing numerous men and women of faith, save your story about a priest, rabbi and a horse walking into a bar for another occasion. While assuredly rib-tickling, your humor should be cut from the same insightful cloth as your talk. This is your spoonful of sugar to help the medicine go down, but a prolonged tangent quickly comes as across as a disjointed waste of your audience’s time. Above all else, they came to absorb your expertise. Make every joke or jape a treat, but be mindful of making all and sundry feel as though they are being fed popcorn when craving a steak.

Customize The Humor To The Audience

Comedy is subjective. Even superstar stand-up jokesters are patently aware of exactly who pays to see them. Who do you think tells more jokes about country music, pickup trucks, and fishing – Larry the Cable Guy or Chris Rock? For instance, ponder your anticipated crowd’s likely millennial-versus-baby boomer ratio before busting out self-deprecating stories about not really understanding social media norms. Should you find yourself delivering a keynote at the Democratic National Convention, perhaps leave your Hillary Clinton-related zingers off your notecards and don’t expect cracks about the Libertarian Party to strike as solid a chord as they might at a roast of Ron Paul.

Stay Away From Anything Too Offensive Or Risque

Speaking of political humor, let us not mince words: unless specifically speaking at an explicitly partisan event or one built around a particular hot-button issue, play it safe and steer entirely clear. Even seasoned comedians and comedy writers have occasionally stepped far outside their wheelhouses and assumed they could pirouette with impunity atop that fine line between imbuing sensitive topics with refreshing humor and either an ignorant or willful absence of tasteful decorum.

When a veteran comedian wades beyond his depth, there is always the defense that simple jokes with undue gravity squelches creativity and does the rapport between performer and audience no favors. To that, fair point. Then again, unless you happen to be headlining the Aspen Comedy Festival, you are far better off not risking your credibility on material that might offend or single out people who were previously enthusiastic about taking in your presentation.

Generally speaking, scrub your talk of any racist, sexist, ethnic, and otherwise vulgar or indecent humor. At all costs, you should also avoid blue, black, and insult comedy, as well as strong sarcasm and cringe material. You won’t lose anyone’s interest by keeping things simple and clean.

Believe, Commit, But Be Ready To Pivot

Screw half-measures. Dive headlong into the moment and commit as much to your sense of humor as do to your topic. At the same time, every comedian and speaker alike eventually experience that one defining moment when something goes a bit askew. If some line in your talk doesn’t come across exactly as you had hoped, take a moment to make light of it and yourself. No matter how deeply you tap into the show playing out in your head, the one unfolding in front of you is the one that matters. You only notice the crowd’s reactions astutely enough to adjust as necessary when you anchor yourself at the moment.

Rehearse, A Lot, Until It Sounds Unrehearsed

That brings us full circle back to the most critical consideration when infusing your public speaking style with charming dashes of humor: never allow yourself to sound ‘rehearsed’. More often than not, this demands compulsive rehearsal.

Think back to every Comedy Central stand-up special, YouTube clip, or Def Comedy Jam you have ever seen. More often than not, every punchline struck with a sniper’s precision. Each performer flowed with measured timing and effortless comfort from one joke to the next. You winced at rare pangs of pity when some witless heckler decided to hijack a set from Joe Rogan or Amy Schumer and stumbled tragically into public verbal vivisection.

Do you honestly believe those audiences were the first to ever hear those jokes?

As somewhat of a tradition, the hardest working comedians from Richard Pryor, Robin Williams, and Sam Kinison to Dane Cook, Dave Chappelle, and Tracy Morgan have only presented new material to massive audiences on tour after workshopping it obsessively in private and eventually in front of more intimate club audiences. By the time these and other names among revered comedy names record hour-long televised sets or full albums, their words feel natural enough from untold polishing sessions for them to smoothly change up subtle aspects of their presentation from one set to another and never show off the exact same performance twice. When something throws them off their game, they dance circles around the snag. After all, they train to never lock themselves too tightly to a single script.

That’s exactly why a gangbusters corporate talk or electrifying stand-up set has the unruffled feel of a laid-back chat with the coolest cat in the room. Everything comes across as chill and spontaneous precisely because the presenter has already rehearsed the subject matter in countless different ways to the point that what is being said may barely resemble the original script. Comedy is about tapping into the most blemished slices of the human experience everyone in a single audience is most likely to have ambled into at some point. It isn’t always neat. It doesn’t always play out as planned. However, it is definitely all about knowing your act well enough that you could rattle it off as engagingly over a cup of coffee as you would live from Madison Square Garden.